So far, we’ve dealt with discrete pieces of data: one number, one string, one value. When programming, it is more often the case that you want to work with groups of data.

Clojure has great facilities for working with these groups, or collections, of data. Not only does it provide four different types of collections, but it also provides a uniform way to use all of these collections together.

A vector is a sequential collection of values. A vector may be empty. A vector may contain values of different types. Each value in a vector is numbered starting at 0, that number is called its index. The index is used to refer to each value when looking them up.

Note that the numbers start with 0. That may seem strange, but we often count from zero when programming.

Vectors are written using square brackets with any number of pieces of data inside them, separated by spaces. Here are some examples of vectors:

When there are a couple of turtles, (turtle-names) command will return turtle names in the form of a vector.

The next two functions are used to make new vectors. The vector function takes any number of items and puts them in a new vector. conj is an interesting function that you’ll see used with all the data structures. With vectors, it takes a vector and an item and returns a new vector with that item added to the end of the vector. Why the name conj? conj is short for conjoin, which means to join or combine. This is what we’re doing: we’re joining the new item to the vector.

Now, take a look at these four functions. count gives us a count of the number of items in a vector. nth gives us the nth item in the vector. Note that we start counting at 0, so in the example, calling nth with the number 1 gives us what we’d call the second element when we aren’t programming. first returns the first item in the collection. rest returns all except the first item. Try not to think about that and nth at the same time, as they can be confusing.

Maps hold a set of keys and values associated with them. You can think of it like a dictionary: you look up things using a word (a keyword) and see the definition (its value). If you’ve programmed in another language, you might have seen something like maps–maybe called dictionaries, hashes, or associative arrays. 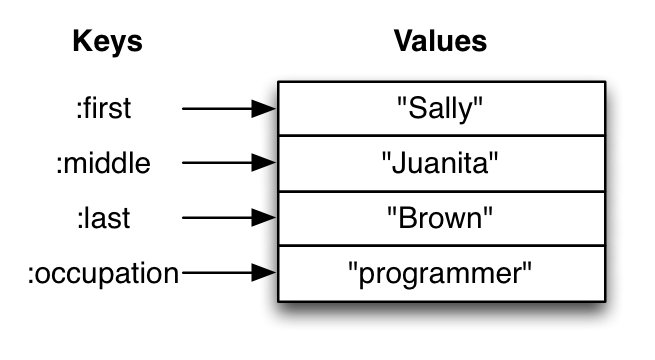 We write maps by enclosing alternating keys and values in curly braces, like so.

Maps are useful because they can hold data in a way we normally think about it. Take our made up example, Sally Brown. A map can hold her first name and last name, her address, her favorite food, or anything else. It’s a simple way to collect that data and make it easy to look up. The last example is an empty map. It is a map that is ready to hold some things, but doesn’t have anything in it yet.

When turtle received commands such that forward or right, those return the result as a form of map of map.

assoc and dissoc are paired functions: they associate and disassociate items from a map. See how we add the last name “Brown” to the map with assoc, and then we remove it with dissoc. merge merges two maps together to make a new map.

count, every collection has this function. Why do you think the answer is two? count is returning the number of associations.

Since map is a key-value pair, the key is used to get a value from a map. One of the ways often used in Clojure is the examples below. We can use a keyword like using a function in order to look up values in a map. In the last example, we supplied the key :MISS. This works when the key we asked for is not in the map.

Then we have keys and vals, which are pretty simple: they return the keys and values in the map. The order is not guaranteed, so we could have gotten (:first :last) or (:last :first).

After the creation, we want to save a new value associated to the key. The assoc function can be used by assigning a new value to the existing key. Also, there’s handy function update. The function takes map and a key with a function. The value of specified key will be the first argument of the given function. The update-in function works like update, but takes a vector of keys to update at a path to a nested map.

Simple values such as numbers, keywords, and strings are not the only types of things you can put into collections. You can also put other collections into collections, so you can have a vector of maps, or a list of vectors, or whatever combination fits your data.

Return to the first slide, or go to the curriculum outline.